This open edition of prints was created to give away at the first protest to the murder of Oscar Grant by Oakland police. We continued to print posters after January 7th  in order to keep Oscar’s face in our collective consciousness as community continued to call for justice.

Early New Year’s Day in the Fruitvale District of Oakland, BART (Bay Area Rapid Transit) police murdered unarmed, 22 -year old, Oscar Grant III by pushing him face down to the ground and shooting him in the back. After he was shot he was handcuffed. The shooting was fatal.

Having come of age in Los Angeles during the uprisings that followed the Rodney King verdict- this incidence of violence enacted by the State rings eerily familiar.

For me this is a crystal clear example of how racism is alive and well in the United States. People would like to think that because Barack Obama has been elected president that some how we, as a nation, are “post-race”. What really irritates me about this line of thinking it the conflation of race and racism. One is a category another is an active force that impacts real people’s lives.

The fact that racism probably had a huge role in Oscar Grant’s death chills my bones.
The practices of the police continue to demonstrate this: the way they are trained, the way stereotypes and profiling are reinforced institutionally and how little-to-no accountability the police have with communities of color. These communities are instead terrorized by the police.

Jesus Barraza and I (Melanie Cervantes) collaboratively developed this poster and drew a connection between the violence enacted domestically by transit police in Oakland and Israeli occupying forces (and their attacks which have killed hundreds of Gazans including many women and children.) 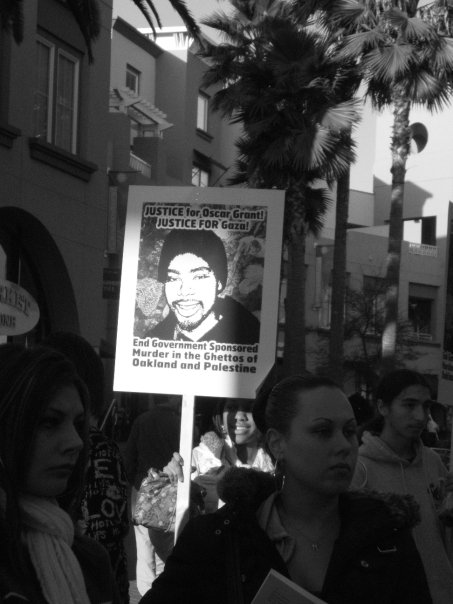 Photos from January 14, 2009 protest at City Hall/ Frank Ogawa Plaza. Youth organizers from Youth Together. Grounded in a commitment to peace, unity and justice, the mission of Youth Together is to address the root causes of educational inequities by developing multiracial youth leaders and engaging school community allies to promote positive school change.